TensorFlow Serving has “batching” capability because the model inference can be “vectorized”. This means that if you let it predict y for x, versus one hundred ys for one hundred xs, the latter may not be much slower than the former, because the algorithm takes the batch and performs fast matrix computation, or even sends the job to GPU for very fast parallel computation. The effect is that the batch may take somewhat longer than a single element, but per-item time is much shorter, hence throughput is much higher.

As a model service, however, this does not require the client to send a batch of xs at a time. Instead, the client sends individual items as usual. The server collects these requests but does not do the real processing right away until a certain amount has been accumulated or a pre-determined waiting-time is up. At that point, the server processes the batch of input, gets a batch of results, and distributes individual responses, out of the batch of results, to the awaiting requests. Obviously, it has to make sure that things are in correct order, for example, the second request should not get the result that is meant for the first request.

This is a common need in machine learning services. However, in many situations, TensorFlow Serving may not be the right framework to use. In this post, we’ll design such a server in Python using only the standard library. Although we’ll use machine-learning terminology like “model” and “inference”, the idea and code are general.

We’re going to develop a class BatchedService for this purpose. The “core” vectorized model is a class named VectorTransformer. A high-level design decision is to let VectorTransformer run in a separate process, so that the main process concentrates on handling requests from the client—receiving, batching, preprocessing, dispatching results to the awaiting requests, and so on. This multi-process structure allows the logistics in the main process to happen in parallel to the “real work” of the VectorTransformer, which is compute-intensive. (By the way I dislike the fashion of using “compute” as a noun, but that’s out of scope here…)

We may as well present the architecture up front and explain below. 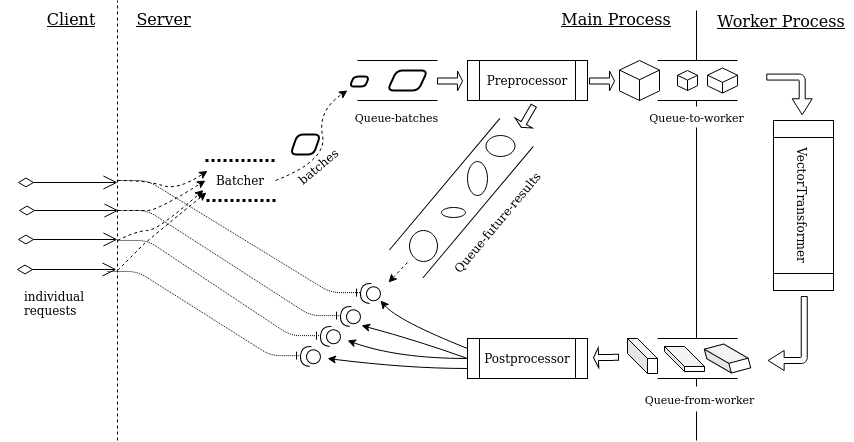 As individual requests come in, a “batcher” (Batcher in the diagram) collects them and holds them in a buffer. Once the buffer is full or waiting-time is over (even if the buffer is not yet full), the content of the buffer will be placed in a queue (Queue-batches). The unit of the data in the queue is “batch”, or basically a list of individual requests. Preprocessor takes a batch at a time out of the queue, does whatever preprocessing it needs to do, and puts the preprocessed batch in a queue (Queue-to-worker) that is going through the process boundary. The worker process takes one batch at a time out of this queue, makes predictions for this batch by the vectorized model, i.e. VectorTransformer, and puts the result in another queue (Queue-from-worker). Back in the main process, Postprocessor takes one result batch at a time off of this queue, does whatever postprocessing it needs to do, and critically, unpack the batch and distributes individual results to the individual requests, which have been waiting.

When Preprocessor puts a preprocessed batch in Queue-to-worker, it also out something in correspondence to another queue called Queue-future-results. This is where it gets more interesting, and we’ll get to it shortly.

It’s useful to highlight that

Now let’s code it up!

The classmethod VectorTransformer.start is the target when we launch the worker process from the main process. This method takes only simple parameters, and it will create an instance of VectorTransformer and start an infinite loop of processing by calling the method run of the instance.

The core task of the worker is accomplished by the method transform. This is a vectorized function, which takes a list of input units and create results for them at once in some parallel or other fast way—at least that’s the intention. User must subclass VectorTransform and implement their specific transform. VectorTransformer also allows preprocessing and postprocessing before and after transform. By default, these are simple pass-throughs, and that may be enough for simple scenarios. In reality, there are all kinds of special needs that can use preprocess and postprocess to take care of peculiarities so that the core transform stays clean and efficient.

As we see, run follows a simple, sequential flow of logic: it takes input from a queue, runs the input through preprocess, transform, and postprocess, and sends the output of postprocess back to the main process via another queue. Of course, what happens in transform does not have to be simple and sequential. For example, it may very well use multiple cores to do some parallel computation. However, it is important to stress that the worker processes the data in the queue in a sequential way, hence the order of the sequence is maintained.

For the sake of simplicity, we have omitted exception handling and logging.

Starting off the main process

The main process centers on a class called BatchedService. It expects several parameters controlling the behavior of batching:

The master control of the BatchedService class is a method called start:

The parameter worker_class is a subclass of VectorTransformer. Note that it is the class object itself, not a class instance.

The attributes self._q_to_worker and self._q_from_worker represent the queues “Queue-to-worker” and “Queue-from-worker”, respectively, in the architecture diagram. They are responsible for passing data to and receiving results from the worker process.

This method starts the worker process as well as “Preprocessor” and “Postprocessor” as shown in the diagram. All these three components stay in infinite loops, waiting to receive and process requests.

This starts off pretty good. The bad news is, this is all the low-hanging fruit there is. Next, we will start looking into the tricky part—request batching.

The method do_one is the user-facing entry point; in other words, it’s the API. This method submits a single data element, x, and obtains an asyncio.Future object. It then waits on this object until it contains result. Note that this function is async, meaning other data elements may call this function again while a previous call to it is awaiting result. The different calls are independent of each other. They are async and concurrent.

The methods _submit_one and _submit_batch constitute the “Batcher” in the diagram.

_submit_one puts x in the internal “buffer” (or Batcher) mentioned above. Once the buffer is full, it calls _submit_batch to put the content of the buffer in Queue-batches. Remember that it can’t just wait for the buffer to fill up no matter what. It also needs to set up a callback, which is also _submit_batch, to fire up in certain time even if the buffer is not yet full. Finally, it creates a Future object to hold the result, once it’s available at a later time, and returns the Future to do_one.

By now we have touched on most of the internal variables that need to be maintained, hence we’re ready to list the __init__ method:

Of the instance variables,

The data element x and the corresponding Future object are put in _batch and _batch_futures, respectively, at the same index. After this, if the batch reaches capacity, the method _submit_batch is called immediately. Otherwise, if a new batch is just starting (the first element has just been inserted), a timer is started to fire the callback _submit_batch.

Failing both checks, we’re in the middle of populating the buffer. Nothing special needs to be done. At a later time, the buffer will be processed either when it is full, or when the timer expires.

The callback _submit_batch is a regular sync function. This is required by call_later.

This method intends to put the content of the buffer in the queue _q_batches. Because the queue has a capacity limit, it could be full at the very moment. In that case, remember _submit_batch is a sync (i.e., blocking) function, hence we can’t wait there. The solution is to set a timer to call _submit_batch again sometime soon, and exit right away.

On the other hand, if there is room in _q_batches, then both _batch and _batch_futures are put in the queue as a tuple. This ensures the input data and result Futures are in correspondence. After this is done, _batch_len is reset to 0, indicating to _submit_one that the buffer accepts new requests.

Remember that _submit_one checks for _batch_len < max_batch_size to determine whether the buffer is accepting new elements. It may very well happen that this condition holds true while _submit_batch is executing due to timer expiration. This won’t mess up, because _submit_batch is blocking, that is, _submit_one won’t be executing at the same time. In this execution, _submit_batch may find _q_batches to be full, hence it starts another timer and exits—while _batch_len stays below max_batch_size. During this extended wait, _submit_one can continue to put elements in the batch until it is full.

By now we have put batches in a queue (_q_batches). Coming next is to put them, one by one, in another queue (_q_to_worker) that passes data into the worker process. This is handled by Preprocessor in the diagram, which is represented by the method _run_preprocess.

The design provides a hook preprocess for subclasses to perform transformation on the batch as needed before the batch is sent to the worker process.

In _run_preprocessor, the data elements and their corresponding result Futures part ways: the former go to _q_to_worker destined for the worker process, whereas the latter go to _q_future_results, which “stays” in the main process. Batches in _q_to_worker are to be processed in sequence in the worker process, and will come back out of _q_from_worker in the same order. In the meantime, the Future elements are put in _q_future_results in the same order, and they will be picked up by Postprocessor in the same order. All in all, the input data, the results, and the Future objects that will receive the results, stay coordinated in the same, correct order. Each individual request holds a reference to the particular Future that will contain the result for it. It is guaranteed that this Future will get assigned the result that is meant for this request.

Postprocessor takes the results from the queue _q_from_worker, and distributes them to the awaiting requests.

Similar Preprocessor, the design provides a hook postprocess for subclasses to perform transformation on the result as needed.

One detail here is that a Future variable, after being taken out of the queue and assigned the result, goes out of scope and is garbage-collected. This is not a problem, though, because this variable is but one of two references to the same Future object. The other reference is being held by the request (in do_one), which is eagerly, or patiently, waiting for the object to bear result. As explained above, correct correspondence between awaiting requests and results is guaranteed.

Below is a naive way to kill the infinite loops.

Putting it to test

We made up a simple example that verifies “batching” works. The idea is that the computation is totally trivial, but it deliberately sleep for a while in the worker process in the transform method. The sleep time is slightly longer for a longer input list, but much, much shorter than the sum of sleep times were the long list be split into shorter input lists.

We ran the following test code:

and got this print-out:

In this little contrived example, the batched version is 734 times faster than the sequential version.